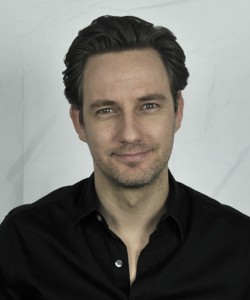 Peter’s working life began at Sony Pictures Imageworks, where he started as a staff concept artist, working on CONTACT, STARSHIP TROOPERS and STUART LITTLE and many more films while there. Later as lead concept artist for IO Interactive he worked on several AAA video games, FREEDOM FIGTHER, KANE AND LYNCH and the HITMAN series among others.

Venturing into directing Peter was nominated at the CANNES FILM FESTIVAL as Best Young Director for his commercial DRIVE SAFE. His short film SUNRISE won the Fuji Film international short film award, the FotoKem award and the Panavision award and was in official selection at several international festivals. His New Danish Screen film PEACEFORCE won the Canal+ Prix at the CLERMONT- FERRAND FILM FESTIVAL, the world’s largest short film festival. And subsequently was sold and got world wide distribution. PEACEFORCE was nominated for a Robert (the Danish Oscar) and was in official competition at the London International film festival, San Paulo and Toronto to name just a few.

Working in Television Peter directed the TV documentary film BAG I KLOVN as well as directing FUNNY HA HA and several other TV projects. Including 27 episodes of LIVE FROM BREMEN contributing to the show becoming the second most watched TV show in Denmark.

Peter then went on to become the Global Cinematic Director at Crytek owning the creative quality of all story and cinematics company wide.

In addition Peter was the Cinematic Director, Art Director and co-writer on RYSE a next generation, story driven AAA X BOX ONE game. This earned Peter a VES nomination for outstanding visuals in a video game, as well as two D.I.C.E. nominations, one for Art Direction and one for best performance by a main character in a video game. (Marius Titus) Peter also won at SIGGRAPH 2014: “Ryse Son of Rome” BEST REAL-TIME GRAPHICS, as well as being shortlisted at SIGGRAPH 2014 for Legend of Damocles: Best short animation film.

Peter is currently the Cinematic Director at IO Interactive working on the new HITMAN AAA game.

Peter has a MFA in directing from the American Film Institute, as well as BA in Illustration from CAA.

1996 – The Ghost and the Darkness – Concept / Storyboard artist